LETTER V! Only four more to go in this A-Z Challenge. Hollar! 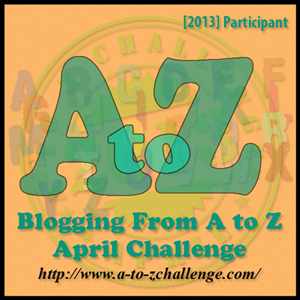 Recently my daughter Frankie asked me and The Husband who we thought we were more like, a vampire or a werewolf? I guess it's an odd question coming from a nine year old, but considering I write paranormal/urban fantasy books, my kids have been surrounded by this stuff since birth. So, there we all sat, seriously discussing the answer to her question.

At the end of our debate, we came to the conclusion  a much more accurate answer could be given if one did not choose for themselves, but the rest of the family chose for them. It is hard to see oneself objectively. (*Coughs* The Husband)

It was unanimous, Jaybird would be a blood sucking VAMPIRE. Naturally, it was then decided The Husband would be a  WEREWOLF. Those two don't generally tend to play nice together, do they? How telling. We also came to the conclusion in my brood, there would be two wolf pups and one mini-me vampire. Hearing their logical, sound reasoning behind such choices was simultaneously hurtful, humbling and hilarious.

Here are just a few of the reasons discussed:
The Husband would be a Werewolf  because....(Oh, it was decided there is no way he could possibly be an omega or a beta, he'd fight his way to Alpha, for sure)
(1) He does not take instruction well. He always has to be the leader.
(2) He is always hot, even in the snow.
(3) He is extremely hairy.
(4) He is territorial and confronts anyone who gets in his space.
(5) He would, without hesitation, annihilate anyone who threatened his mate or pups.
(6) He is hot-headed, defensive, fights first, thinks about it second.
(7) He is more at home in the woods, than in a castle.
(8) He is a skilled hunter.
(9) He is loyal to a fault.
(10) He is always hungry and devours his food "in minutes just like a beast" and doesn't consider a meal to be a meal, unless there is red meat involved.
(11) If you feed him, he won't go away.

Jaybird would have to be a Vampire because...

(1) I am always freezing, even in August.
(2) I have crazy mind powers and always seem to know what people are thinking...
(3) I look exactly like I did in high school. Nothings different. Not even my hair. (I vehemently disagreed with this, but the fam insisted it's true)
(4) It takes me a long time to get angry, when I finally do, I snap.
(5) I tend to brood.
(6) I can hear things that are whispered in another room that aren't really meant for me to hear.
(7) I LOVE to hang out in old spooky Victorian houses and castles.
(8) People must work very hard to earn my trust but once I trust you, there is nothing or no one that could change my mind about you.
(9)I can go days without eating, staying fueled by nothing but coffee.
(10) I never sleep.

Those lovely answers provided by our girls gave The Husband and I some insight into our personalities we may not have thought about ourselves before. So, are you brave enough to ask someone close to you, which would you be, VAMPIRE OR WEREWOLF?
Posted by jaybird at 8:52 AM