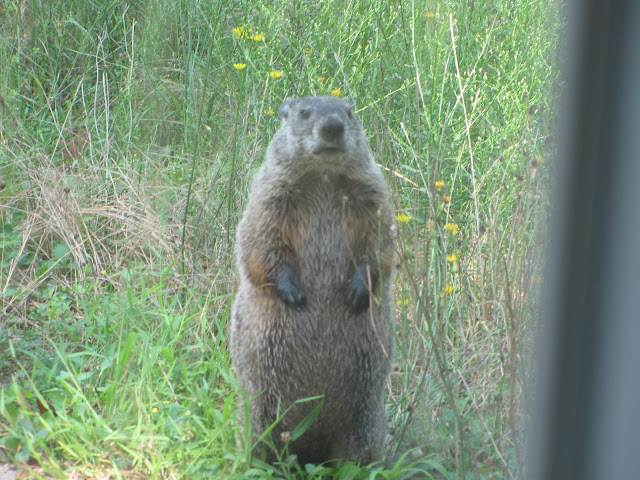 This dude reeks havoc on my garden.  His favorite things to eat are my green peppers and tomatoes. He  also loves to come up as close as he possibly can to the window just to torment my cat.  I should hate him. But I can't. He is  absolutely hilarious. I have never seen anything like him. He is a brazen, daring  and entertaining as heck. 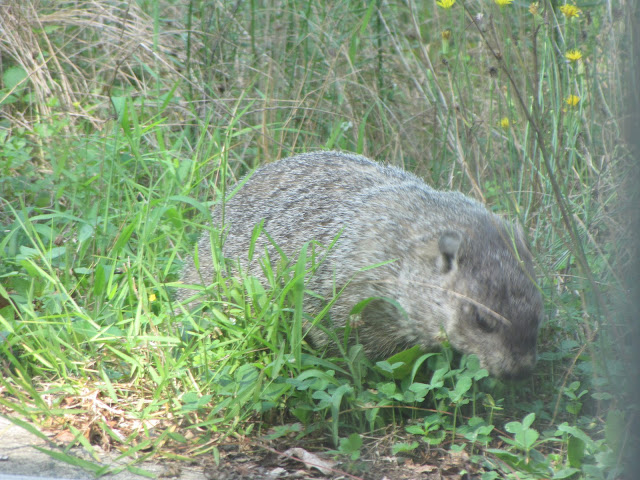 My house is surrounded by woods, so I get all kinds of creatures that venture into the yard. None have been as bold. The wildlife usually darts away the second we spot them. Not this guy. Nope, it's almost like he craves all of the attention.

My girls think he is the funniest thing they've ever seen. They say he acts out  like a bad child, doing naughty and negative things for attention. What they love most about him, is the way he sits and waits for us to pay attention, shows us what he's done wrong, and then s-l-o-w-l-y waddles away. He shakes his enormous booty from left to right and takes his sweet time. Like he's daring us to come follow him.

But my middle daughter, Farrah said, "No  way. Those are normal wood chuck names. This dude is NOT NORMAL. He's hilarious. And he's just like me."

She said, "He's got an attitude. Like he knows he's cool. He's got chubby swagger, just like me."

After we all fell out laughing, we had our name. Say hello to our little friend  Chubby Swagger!

What would you describe as your best personality trait? Do you have "Chubby  Swagger" or something else that defines you? What sets you apart?  How do other people describe you? Drop  me a comment, I'd  like to know.
Posted by jaybird at 8:50 AM