Are You Ready for SomeFootball- Friday Fact or Fiction

Hi Everyone! Before I get into my Friday Fact or Fiction post I am super excited to announce, that although I normally don't post on Sundays, this Sunday, (August 12th) I am making an exception to that rule. Because the fabulous Miss Kyra Lennon is going to be my guest at The Bird's Nest.  I'm happy to be one of her stops on her Game On blog tour. Please pop in and show her some love. Thanks!

For those of you new to this little game I like to play, here's the deal: On Fridays I like to leave you with  three stories, and you  (hopefully) would like to vote on which you think are FACT or FICTION. And if your still interested, I always post the truth on Saturday. This week's theme, is Are You Ready for Some Football?


#1. The New York Giants are my favorite football team- I love nothing more than going to a home game. The only drawback to tailgating (for me) MAY or MAY NOT be the disgusting, dirty, Johnny-on-the-spots you have to use for a toilet, in the parking lot. 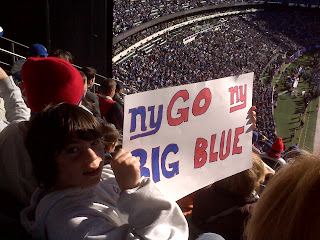 I am a South Jersey girl, so it takes a good two hours to get to Giants Stadium. Which means, Jaybird is up at the crack of dawn and must drink buckets of coffee in order to pull it together and make it to the game on time. There is simply no way I can hold out, and NOT use a port-o-potty. They are smelly and skievy, but because there is no where else to go, they always have a HUGE line.  Once, when I could hold it no more- I found myself on one of those long lines, waiting.

Not only was it numbing, freezing cold, and windy, my girlfriend and I had to wait what seemed like forever for our turn to go. Finally, it was my turn, and to put it mildly, it was not a moment too soon. I guess I was in a bigger hurry than I thought, because I MAY or MAY NOT have fully locked the door. When I went to  squat, my giant head accidentally hit the cheap blue plastic door, which caused it to open a crack. But the wind took that moment to pick up, and throw the door wide open, giving the entire parking lot and long line of people waiting for their turn, a view neither of us bargained for. I froze. Thank God my BFF was still standing there, and she thought fast, running forward and slamming it shut- in a very NFL worthy move. 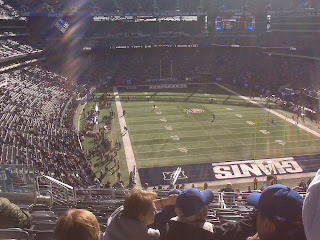 #2.  A while back, the Giants MAY or MAY NOT have sent Jaybird and a bunch of her girlfriends, an invitation to an event called Giants 101. Giants 101 is geared towards females, where some key players give a "work shop" to help teach the ladies all about the sport. I have watched football with my Dad, since I was a little girl, and didn't need to learn a thing. But I  wanted to attend anyway, so I could meet some of the players. Specifically, #92 Michael  Strahan.

Michael Strahan is my favorite Giant. When I walked in  and saw him sitting at the table, I MAY or MAY NOT have freaked . Grabbing my friends, I somehow wormed our way to his section and sat down.  He definitely lived up to all of my expectations. Michael Strahan was genuine, funny, intelligent, warm and very intent in his task of trying to pull the ladies into watching his beloved game.

None of  Jaybird's friends with her that night, could give a hoot about football, and knew absolutely nothing about it. It was brutal to sit there listening to their questions, biting my tongue, saying nothing, pretending to know zilch about the sport or #92. When in actuality, I knew every one of Strahan's stats inside and out. I was dying to ask him a  billion real questions, specifically how he felt back on October 23, 2006 when he tackled Drew Bledsoe in the Monday night game against Dallas, tying Lawrence Taylor's record for the most Giant sacks. (132 1/2).

When the evening was finally over, and he had finished his closing arguments about how great a sport football is, once you understand it, I could hold back no  more! Jaybird, MAY or MAY NOT have blurted out all of my extremely specific questions, like the one above and  a few more, that gave me away!  Michael Strahan, MAY or MAY NOT have stood up to his full, 6 "5" 275 frame, and then broke into a huge gap-toothed smile! He laughed real hard, saying, "You played me good! I should have know, you were so quiet all night. It's always the quiet ones." 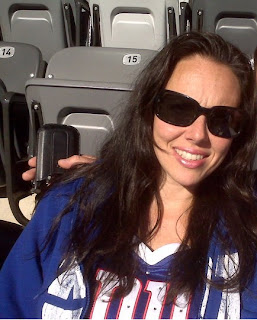 #3. Jaybird does not like to miss too many home games. Once, when I was super-sized pregnant, the Giants were playing a huge game against the Eagles. The rivalry between these two teams is cra-zy. And I wanted to go bad. The Husband protested. He didn't want to have to worry about my big mouth trying to protect me from any over-zealous fans. Fights are so much more common when we play the Eagles. I begged and pleaded my case, stating that I would keep my mouth shut stick close to him and all the other giant cops who we were  going to the game with us.  Because I am really annoying, he finally gave in.

Everything was going great too, until we got into the stadium. It took everything in me to waddle up all those steps. By the time I got to  the top,  I was sweaty, out of breath and completely exhausted. (Also, even though we just ate, a little hungry, again.LOL) I couldn't wait to plop down into my seat.  When I tried to sit down, Jaybird's giant preggie ass- no longer fit so nicely in my seat! Sigh.

The Husband, as I may have stated, at time or two before, misses nothing. From the moment we got to our seats, he had surveyed the crowd around us, checking for any potential threats.  He spotted two or three guys, who had TROUBLE stamped on their foreheads.

The Husband and his friends had worked it out so that they had me covered from the seat behind, to my left and two in front, but the seats to my right,  were unoccupied as of yet, and left me completely exposed. The Husband MAY or MAY NOT have started to freak, and he was thinking of making me leave!

It was at this moment, the fans filling the empty seats to my right, returned from the beer line to come and claim their spots. They leaned over to introduce themselves. Not only were these four guys ginormous, but they were all NYC cops! They shook The Husband's hand and said "Don't worry 'bout nuthing, nobody is gonna touch her!"

Sure enough,  about half-way through the game, the guys The Husband had nick-named "trouble" started a wicked, all-out stadium brawl, a few seats away. Or so I'm told. I MAY or MAY NOT have seen or heard a thing, because before I could blink, I had four enormous NYC cops draped over me like a flag.

OK, there you have it. Please vote on which of these three stories are FACT or FICTION. As always, thank you so much to all of my followers who keep coming back to participate in my FFor F posts!
Posted by jaybird at 10:40 AM