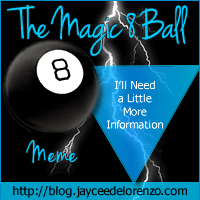 OK, I have to admit  right up front, to hating those balls when I was a kid. It NEVER gave me the answers I wanted - even after I cheated and shook the shiz out of it! BUT, because Jaycee DeLorenzo brought this meme to life, and she is all kinds of AWESOME, I'm down with it!!

In short, here are the rules:
1. Post the button and link to http://blog.jayceedelorenzo.com (following would be nice, but not required).
2. Share an excerpt from your current WIP, perhaps something you're struggling with, are stuck on, or just can't "get right."
3. Ask a question about your excerpt. It can be something easy such as "What do you think?" or something more in-depth, such as "Can you suggest a better way to word such-and-such," or "How can I make the emotions in this scene more realistic?"
4. Tag 8 people.
** I'm not quite  sure who was tagged, but feel free to ignore me if you were tagged already or if you don't want to participate. Feel NO pressure to do this, if you don't want to.***

In a nutshell,  I've been epically failing at writing this query, for quite some time. It needs HELP. Any assistance/love/help/suggestions you can throw my way, would be greatly appreciated. Thanks guys!!


Sitting on a jury is the last thing any normal nineteen year old girl, would want to do. But Jenny Cardinale is no ordinary girl. After taking a peek into the wicked soul of the mob boss on trial, and seeing his demons sneer back at her, Jenny's determined to prove, contrary to popular belief, a short skirt and big boobs does not make for a bad juror! Taking on the mob is not exactly the safest decision for a nice Sicilian girl from the Jersey Shore, like her to make. But considering her life is already being threatened, night and day, by her demonic douche-bag ex, really, what does she have to loose?


Jenny's becoming adept at dodging her enemies attempts at taking her out, all on her own. But when her best friend, NFL running back, Carl Le Claire, announces his love for her on Sport's Center, everything changes. The mafia and her psycho ex, decide to join forces, in an attempt to eliminate her, once and for all. The FBI immediately insists on placing her under their protection. Jenny agrees, although already resigns herself to defeat. Knowing full well no human being, could possibly protect her. At least, that's what she thinks, up until she catches her first glimpse of Special Agent Andrew Moore. As she watches him effortlessly extract a demon from the twisted soul of a lawyer, (and everyone knows lawyers are all kinds of evil) Jenny dares to feel something she hasn't felt in years, hope.