What to Expect When You're Expecting Fact or Fiction, Answers!

*** If you didn't read yesterday's What to Expect When You're  Expecting Friday Fact or Fiction Post, you might want to go read that before I give you the anwers here***

This week's answers are simple. They are all FACT!!

#1-Not since I was roughly the size of a house and so pregnant I wouldn't dare sneeze in fear of exploding, has ANYONE  pursued me like that wickedly handsome young cop. Maybe it was a bet or a dare or something, because I still don't understand why the heck he was so interested in me. The best part was coming home and telling The Husband, "Guess what? I've still got it!!

#2-To see a voo doo priestess in a Jersey Shore supermarket, is odd within itself. But to see one making a beeline straight for you is like a scene from a horror movie. In all of the years I've known The Husband, I have never seen him so much as flinch in the face of fear. This woman, UNNERVED him. He and I both felt the hair on the back of our necks stand up as she approached. The people on line around us, were equally affected. Flabbergasted, we watched what was about to happen, like it was in slow  motion. To add to her freak factor, the priestess was with a large white man, who's gut was sticking out from underneath a dirty, ripped t-shirt that was two sizes too small. He was obviously with her, but walked two steps behind, with his head down and his hand on her shoulder and his  arm extended. It remains, to this day, one of the most bizarre things Jaybird and The Husband have ever encountered. (And if you know Jaybird and her life, that's saying something!) What really makes The Husband and I shiver is how she was absolutely right! I had a beautiful baby girl and although she prefers me to straighten them, she has an amazing set of  curls!

#3-What can I say, milk happens! Because the baby slept through two of her regular feeding times, my breasts were fully loaded. The Husband loves to tell this story  as a cautionary tale to all the new fathers he meets.

Thanks for participating. Have a wonderful Mother's Day-  Here are the Three Reasons I will! 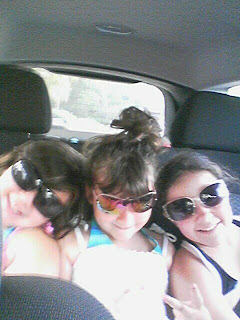