Friday Fact or Fiction-What to Expect When You Are Expecting

This weeks Friday Fact or Fiction is What to Expect When You Are Expecting. I was sitting here thinking  about what I should choose for the theme  and thanks to a brilliant post: Attn: Soon to be  Uncles, from  Good Youngman Brown, (if you don't already follow him, YOU SHOULD)  I decided to use pregnancy as my theme. For those of you who don't already know this about me, I had three kids in three years, which means (1) I'm nuts (2) I was pregnant for a long, long time.

If you are interested, check out three random facts from Jaybird's life and let me know which you think are Fact or Fiction. I post the answers tomorrow.

#1. Some men are slightly grossed out by pregnancy and all the changes it brings to their partner's bodies. But then, there are The Others. There are men out there, who are seriously ATTRACTED to pregnant women..... Once when Jaybird was super-sized and ridiculous pregnant, she was out on the road and got really thirsty. She may or may not have pulled into a convenience store to buy something to drink.  A young, buff, and totally hawt  NJ State Trooper was trailing her.
At first, Jaybird was relieved, it was only a young cop following her. Never in a million years would she think this kid was stalking her. She just chalked it all up to him needing something in every single aisle she happened to be in, out of coincidence. That changed as soon as she tried to open the freezer door and get out a beverage. Super Trooper jumped in front of her, like he was taking a bullet instead of a Vitamin Water, out of the freezer. He proudly pulled open the door and handed  her the drink, all the while smiling with these huge dimples and a  perfect smile. Jaybird was kind of weirded out, but thanked him for retrieving her drink anyway. He took this as his opening. He proceeded to ask her a least ten rapid fire questions normal, hetero sexual twenty something cops would never think to ask, all about  pregnancy.

Jaybird had to rethink her initial assessment. This guy must have a pregnant girlfriend/wife, or her GAY-DAR bell was about to start ring-a-ding-dinging.  But she asked and found out he was single. And, the way he was looking at her, was nothing like how her parade of Gay Besties would ever look at her (unless she is wearing something Couture!!) Jaybird thought, huh, how strange.

She started to make her way over to the counter. Once again, Super Trooper jumped in front of her. He insisted on carrying her items up to the counter and paying for it, no matter how much she protested. Jaybird waddled out to her car, but again, he followed her, just to "open her door". The Trooper may or may not have stood there all dimply and staring at her for a few more minutes until it just got, uh, AWKWARD.  She really wanted him to close the door so she could leave, but he wouldn't stop with the staring. Finally, he told her he  thought she was the most beautiful girl he had ever seen, and begged her to go out with him!

#2. Random people like to come up and rub a giant pregnant belly, regardless of whether or not they have been invited to do so. This really freaked Jaybird out. Usually, it was harmless older people or moms...But nothing freaked her out more than when  Jaybird and The Husband were standing on line at  Shop Rite, waiting for their cold cut order to be done. Jaybird may or may not have been  noshing on a free sample of provolone, when a VOODOO priestess, with crazy dreads, wearing a floor length robe, complete with a bone THROUGH HER NOSE, twine necklaces with all kinds of spice packets and various evil paraphernalia pinned to her chest, starts to head straight for her giant belly bump!  Of course,  The Husband is not about to let that hand come anywhere near his pregnant wife, but before he can take her out  say something, she screeches at Jaybird in this weird voice, "It's A Girl,  with lots of Curls, and she's gonna be  Beautiful!"  Prior to food shopping, The Husband and Jaybird may or may not have just taken an Ultrasound, confirming our baby was a girl.
﻿
#3. About seven weeks after Jaybird had delivered her baby, she was absolutely EXHAUSTED. Jaybird, may or may not have layed the baby down in her crib, who was sound asleep, and then passed out herself.  The Husband, had already been in bed sleeping for several hours.(of course) Jaybird may or may not have been in the first deep sleep since the baby was born when all of a sudden The Husband starts cussing and shouting, waking her up.  "Damn it! The freaking roof is leaking! Don't you feel the water dripping?" Jaybird,  could have cared less if it poured on his head,  she was finally getting some sleep! Besides, she hadn't felt a thing. When she looked at the clock, she realized that she and the baby had slept (for the first time) six hours straight! It may or may not have been a miracle, and The Husband ruined it. He was still  looking for a leak, when Jaybird rolled over and tried to fall back to sleep, while the miracle lasted. It was then she realized her breasts, full to the brim and exceeding maximum capacity, had been squirting breast milk out so hard and so high, it was hitting the ceiling and falling back down, dripping onto The Husband's head. Jaybird may or may not have found the source of that leak after all!
Please vote which are Fact or Fiction. I will post the results tomorrow.  And if any of you have your own What to Expect moments to share, I would love it! Here is a picture of me and my momma. Happy Mother's Day everyone! 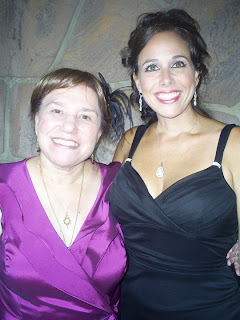 Email ThisBlogThis!Share to TwitterShare to FacebookShare to Pinterest
Labels: breast milk, Mama Odie, pregnancy, what to expect when you are expecting