Hi: To all my fellow writers, here is a writing contest I came across from Agent Suzie Townsend over at her blog, Confessions. The rules are as follows:

You must include the words EVIL, VAMPIRE, ETERNAL, LOVE, and DEATH. No more than 100 words are allowed. And she would rather read entries that are NOT about Vampires.. Contest Ends Friday, March 2nd. Good Luck!


He called again last night, all desperate and needy. Emotions as alien to him, as they are to me. Allowing myself to fall in love with a ridiculous tool like Brooks T. Powell, III, was criminal.


I watched as he sauntered into the party late, dressed like a vampire. How completely predictable. I already know he's a harbinger of eternal death and all things evil, no costume necessary. As he glided over to Missy, wrapping her up in his faux cape and charm, I wondered how long it would take before my best friend figured it out?

I absolutely love The Big  Bang Theory. Sheldon cracks me up. Now there is a "Soft Kitty" pillow that sings for sale. Thinking I must acquire one for my girls.  :)

Then again, we have our own Soft Kitty to cheer us up !! 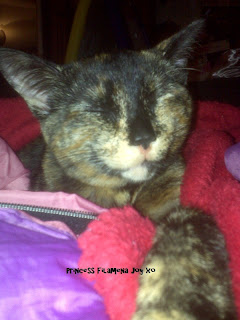 Posted by jaybird at 8:06 AM No comments:

Be Careful What You Wish For..

Back in high school, I had the biggest crush on this blond haired, blue eyed, boy. I had convinced myself we would be perfect together. And no one could convince me otherwise. It is near impossible, once I make up my stubborn mind, for anyone to change it.

Almost daily I would get someone to drive me past his house. My friends, mom and sisters even nicknamed it, "taking a run". Funny, out of all of the times we drove by, not once did I ever see him outside.  It didn't matter, it was making the effort to drive by that did. Because in my mind, effort, no matter how big or small, is always rewarded.

When this boy graduated from high school and I remained in obscurity, I refused to give up. I kept on hoping and believing and working to get him to notice me. Eventually, all of my hard work paid off.  The summer of  my senior year, he came home from college and finally, finally, asked me out! Woo hoo. I thought, this is it! What I had been wishing for all of these years, was finally going to happen. I couldn't believe my good fortune.

As I sit here and recall how painstakingly I prepared for that date, I'm cracking up.  As you can imagine, I lamented over every minute detail: hair, make-up, nail polish and finding the most amazing, knock your socks off, out fit to wear, everything had to be perfect. I refused to blow my shot at what I had been working for, for so long.  (Honestly, I don't think I've put that much effort in getting ready for anything since, not even my wedding!)

Since I'm ridiculously bubbly and effusive to begin with, it should go without saying my excitement level was off the charts that night. I couldn't contain it! Unfortunately, my excitement was short lived. It became apparent, rather quickly, this blond haired, blue eyed boy, was not all I had cracked him up to be. At all.

Before we even left my neighborhood, I had an inkling something was off about him. Yes, I may have had some outrageous expectations, but Lord Almighty, I have never met a bigger drip. Yep, a drip.

The boy was a giant blond DUD with a capital "D". He had zero charisma! It was like pulling teeth to get him to speak or show any emotion. And it wasn't like he had some type of cool, laid back, zen-ish attitude I could grow to respect. Nope, he was just flat out boring. He had no personality, at all. Nothing, nothing, nothing is worse than a dude that's boring.

I spent so much time building him up to be the end all be all to my happiness, I set that poor boy up for epic failure. I can't fault him for it, he did nothing but be his one-dimensional, paper doll self.  There is only one guy I know of who would have totally lived up to all of my expectations... Hugh Jackman..sigh. (And, here we go again!!)

Was there ever an instance in your life, when you pinned your hopes on something, or someone only to be vastly disappointed? Because I'm curious, did you blame it on yourself, the other person, or your circumstances?

Although I learned this lesson years ago, I still need to remind myself of it, much more frequently than I'm comfortable with.
Posted by jaybird at 12:21 PM No comments:

Email ThisBlogThis!Share to TwitterShare to FacebookShare to Pinterest
Labels: Be Careful What You Wish For


The New York Giants are my team. Routing for the G-men is the one thing The Husband and I actually agree on!  What a game. Thought I would burst a blood vessel screaming. It is known, that I may, occasionally, cause a little unnecessary roughness in the stands. Mainly because my mouth is always going. (Are you surprised?) It's all in good fun.  Plus, I know The Husband always has my back and that badge of his to keep me out of jail. This year though, The Husband took his fanaticism to a whole new level. He went absolutely bat crap crazy this year.  He somehow got it into his mind that wearing his G-men pajamas every single game brought the team good luck.

As soon as he came home from work, the uniform came off,  he took a shower  and his NY Giant pajama pants and t-shirt came on.  He wore the same pjs since our first W, way back when we beat the Jets (Like Week 16) . Yep, those jammies were ripe! Beyond belief. They could  crawl. Twice I tried to swipe them and throw them into the washing machine. The Husband was on to me though. I may have mentioned before, that man misses NOTHING. He hid those nasty pants so I couldn't find them. To be perfectly honest, after we played the 49ers I just stopped trying! At that point, I drank the Kool-Aid and didn't want anything to jinx that amazing winning streak either.

Props to Eli Manning. He truly proved Eli=Elite.  And Thank God New Jersey can be proud of someone again.  Victor Cruz!!! What a season.  Now that we won the Superbowl, the time has come to retire The Husband's  nasty furmundo jammies once and for all.

﻿
Oh, and what did you all think of Madonna? Hag or Rad? Leave me your thoughts.....
The Husband was complaining that Madonna was going to perform and he was not thrilled. My little one said, "Who's  Madonna?" and we both felt really, really old having to answer that question. LOL
Posted by jaybird at 5:08 PM No comments: