With Halloween fast approaching, a resurgence of scary movies and TV shows always rise. Some movies, I love to revisit. Today, I watched the original version of The Fly. I remember being so frightened of it when I was a little kid. Help me, help me..it seems so  ridiculous, now. Yet, there are other old school movies that still scare the crap out of me  (i.e., the 1930's banned movie called FREAKS)  And even though my parents absolutely forbid me to, I watched some scary movies on the sly, thinking I could take it. Wrong!! Some of them still haunt my dreams. (One of us, one of us, we accept her!! Yep, those Freaks still scare the crap out of me... ) Today's scary movies/TV shows, however, are a whole new ball game.
There are so many new paranormal movies/TV shows popping up. Take, for instance, Ghost Adventures. Ugh. No one makes me want to bitch slap them faster than ZAC on Ghost Adventures!!  I'm so not a hater. Usually. But everything about that kid and  that show, annoys the heck out of me. He tries to act all cowboy tough, swaggering into supposedly "haunted" buildings, and talking trash to spirits. He is ridiculous! One day, all of his begging with the other side, to make contact, might just back fire. Suffice it to say, even my daughter, who's seven, knows better. After watching approximately two minutes of that show, she actually said, "Mommy, that boy Zac is so dumb. He keeps inviting demons to mess with him!! What's the matter with him?"  Whether you believe in them or not, I strongly suggest NEVER inviting a demon to tango. Ever. Even though Ghost Adventures is a completely faked reality show, what he is potentially opening himself up to, is no joke. And that's truly frightening.
These new paranormal activity movies and the true ghost/hauntings stories, really get  me. Michael Myers, Freddy, Jason, none of those clowns ever did it for me. Being a Paranormal Romance Writer, with an extremely overactive imagination, you can only imagine how my mind  can run with stuff like that. I can psych myself out in a heartbeat. On Friday, I went on a "Night Hike" through the woods, with  my daughter's Brownie troop. There I was, marching along, eating  smores and singing a bunch of  Girl Scout songs, meanwhile, in my crazy head, all I could think about, was how those woods and that scenario, could be the start to a dozen scary movies!!!  Everyone laughed at me when I emphatically refused to be either the first one or last  one in  line.... But I'm not beat.
What was the first movie to ever scare you? I guess it all depends on what frightens you the most. Is it Zombies? Then maybe, Night of the Living Dead was what did it. Are you afraid of  Vampires? (Maybe I wasn't the only one who cried the first time they saw Salem's Lot...)  Leave me your all time scariest movie, I'd love to hear it.
Posted by jaybird at 8:41 PM 1 comment:

The worst week of my life.

This has been one of the worst weeks of my life. And when you consider my life, that's saying something.  The worst part, is that throughout all of my life's ups and downs, through all of the pain and suffering, this week did something to me, that many others did not. Could not. I did not think it was possible, but here we are. I am no longer an optimist. This week stole my optimism.

I have always prided myself in being able to see the bright side, or find some good in all people. Maybe that was my first mistake, PRIDE.  For the first time ever, I find myself not knowing where to go from here, or how to see my way up  and out of this. I've fallen without my safety net; the true belief that things can and will always get better.

What do pessimists do? How do they live like this? It's so depressing to not look on the bright side. It's killing me!  I want to go back to the days of ignorance when I was hopeful and immature and so blindly optimistic, nothing ever kept me down. If I could will myself out of this, I would have already. But it's just not there. I don't think I will ever be able to find it again. It's dead.

My optimism has passed on to the other side.  Sadly, it's moved beyond my reach, beyond my grasp and beyond my control. I shudder to think of living the rest of my life this way, but there is no alternative now. My stomach is in knots, I can't keep anything down, and I haven't been awake for more than a few hours at a time. I just can't deal.

How do you combat such depression? How do you ever recoup from such a loss? I am desperate to find some answers, but sadly, I now know, there are none.
Posted by jaybird at 11:47 AM 1 comment:

Email ThisBlogThis!Share to TwitterShare to FacebookShare to Pinterest
Labels: Worst Week of My Life. 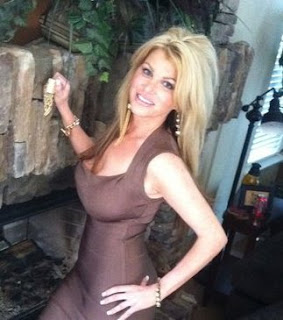 This Beautiful Lady is my friend. For some reason (jealous?!?), people have been hating on her.  And that just pisses me off. I've known this girl since I was five years old. She is a wonderful, loving, sweet, kind, generous woman.  She lives for her kids and her family and would help anyone who was in  need. Why do people have to be so mean? It makes me nuts and I want to go off on all of those hating jerks. PEOPLE, big boobs and lots of make-up does not make a bad girl!!! Stop assuming. You know nothing. And  BTW, "There is only one Lawgiver and Judge...who are you to judge your neighbor?" James 4:12  Just saying.
Posted by jaybird at 1:26 PM 2 comments: