Happy Birthday to The Husband 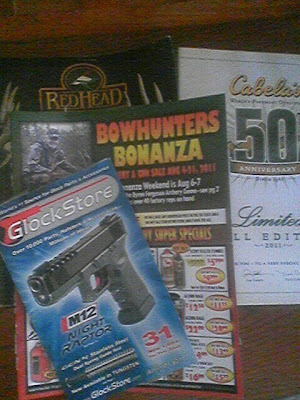 Here's a little look at The Husband's reading material. Is he an Alpha Male or what? In all seriousness, I know I take a lot of liberties, always teasing and poking fun at him, but he is truly the other half of my whole. He makes me crazy..but I return the favor!

The Husband is absolutely everything I'm not. Which, I guess explains why I was so attracted to him in the first place. Yes, we are as opposite as two people can get, but I love that about him. I look to him to fill in my weak spots. He has helped me "man up" so many times I couldn't count. Just knowing he is standing behind me makes all the difference in the world.

The Husband is: ridiculously strong, confident, rough around the edges, outspoken, (well, OK, maybe we do have one thing in common) able to keep calm in a crisis, he can fix/make absolutely anything, and above all, he is so freaking sure of himself, no matter what. All of the hobbies and activities he excels at, like: scuba diving, flying, sharp-shooting/sniper, outdoor survivalist, hunting, deep sea fishing, I suck at. Hard. And have zero desire to even attempt. Yet, I am very proud of The Husband and super happy he is able to do them all.

Although his type A, Alpha Male, testosterone filled personality may not make him the most popular, most PC guest at cocktail parties, he is a SURVIVOR. You see, I am certain, like the cockroach, my husband will survive, if there is ever nuclear war. The post-apocalyptic husband would adapt. He would hunt, live off of whatever he could and he would SURVIVE. Whereas, I would crumble. Completely. Especially without refrigeration, Internet service, coffee...or any of his emergency survival kits.

I have relied on the strength of The Husband for so long now, sometimes I wonder whether or not I could actually survive without him. He is my backbone. He is my greatest protector, loyal advocate, and biggest fan. Whatever weaknesses I have, he sees as his job to fulfill for me. And whenever he puts his foot in his mouth, way oversteps his bounds, or knocks somebody over, it is my job to pick them back up, apologize and smooth things out. (Good thing I worked in Public Relations as long as I did! I had no idea I would be marrying the client from hell and calling upon all of those skills I developed, quite so frequently.) See, together we make a great team, or an outrageous, hilarious, reality show. (That's kind of true, cause we have been approached, on more than one occasion, by people telling us we should do it. Especially after we sat next to a certain couple who are in the industry, at a wedding recently. The entire table tried to convince us to say yes. Ha!)

So, today, cheers to my Husband. Happy Birthday to the other half to my whole. Albeit the infuriating, loud, obnoxious half. J/K. Seriously, I don't know what I would do without you, I love you. xo
Posted by jaybird at 3:24 PM